A new survey published on June 8 2020, the Cannabis as Medicine Survey (CAMS-18), has highlighted that despite legalisation of medicinal cannabis in Australia in late 2016, many Australians are still sourcing illicit cannabis products for medical use. In fact, the survey of over 1300 respondents, found only 25 were using legal prescribed products, with the remainder sourcing it largely from recreational sources or friends and family members.

Most people surveyed were full-time employed and university educated

The survey, led by Sydney researchers, showed that the majority of respondents were employed in a full time position and were university educated, which is potentially a surprise to those that often hear stereotypes of medicinal cannabis users being less educated or unemployed. This is not the case. Furthermore, the average age of respondents was 43 years old, with many respondents in their 60s and 70s.

Medical cannabis used most for chronic pain and anxiety

It’s no surprise that chronic pain was the standout reason for the majority of people to use cannabis products. This aligns well with the top most approved condition via the TGA SAS-B scheme being chronic pain. Back pain and arthritis were top on the list of pain conditions for which cannabis products were being sought for symptom relief.

Pain was closely followed by use of cannabis for mental health conditions such as anxiety, depression and PTSD by survey respondents. Again, this aligns with what is seen from the TGA SAS-B data where >10% of all medicinal cannabis approvals have been for a mental health indication, and this proportion continues to rise.

Sleep disorders are another key reason people are using medicinal cannabis products, primarily for insomnia. This is an area of interest that is currently being explored further in a number of clinical trials of medicinal cannabis in Australia.

What types of medical cannabis are people taking?

Interestingly, the type of cannabis products people reported using were somewhat equally divided between THC-predominant, CBD-predominant or balanced (CBD and THC) products. However, a major caveat in this survey is that the cannabinoid content of these products is unverified, excepting the few respondents with legal prescribed products. Simply put, there’s no way for people to confirm they’re taking what they believe they’re taking. This makes conclusions about different product/cannabinoid types near impossible.

What’s in those medical cannabis products?

One key finding of interest was that over 60% of survey respondents were concerned about the possibility of contaminants (such as heavy metals or pesticides) in the cannabis products they were taking. This is not unfounded given some recent studies in the USA and UK have shown there was some significant levels of contamination or mislabelling in recreationally available products.

What does cannabis cost?

The average amount people reported spending per month on their medical cannabis was just over $350, which is similar to what people accessing prescribed cannabis medicines report spending (between $350 and $450 per month). Unfortunately, due to the unregulated nature of non-prescribed products, it’s not possible for us to estimate the volume or potency of cannabis being used by most survey respondents.

The CAMS-18 survey also asked about people’s use of and preference for delivery mechanisms. Unsurprisingly, most people usually consume cannabis via smoking. But on average, respondents would prefer to use capsules and tablets to the same extent they would prefer to smoke joints. This is a positive sign for many companies which have recently brought a number of new capsule products to market for prescription use.

Cannabis rated as effective by over 70% of respondents

The key side effects reported in the survey were largely mild and tolerable in severity and are well known to be associated with THC, such as dry mouth, increased appetite and drowsiness.

What does this mean for medical cannabis use in Australia?

This survey provides some numbers to support common anecdotes suggesting that only a small fraction of Australians that use cannabis medicinally are accessing legal products.

The timing of the study, as the last data was collected in March 2019, potentially suggests that this number may have shifted since then. At the time of data collection there were only 1,040 cannabis approvals in the month of March 2019, compared to over 4,100 approvals last month (May 2020). 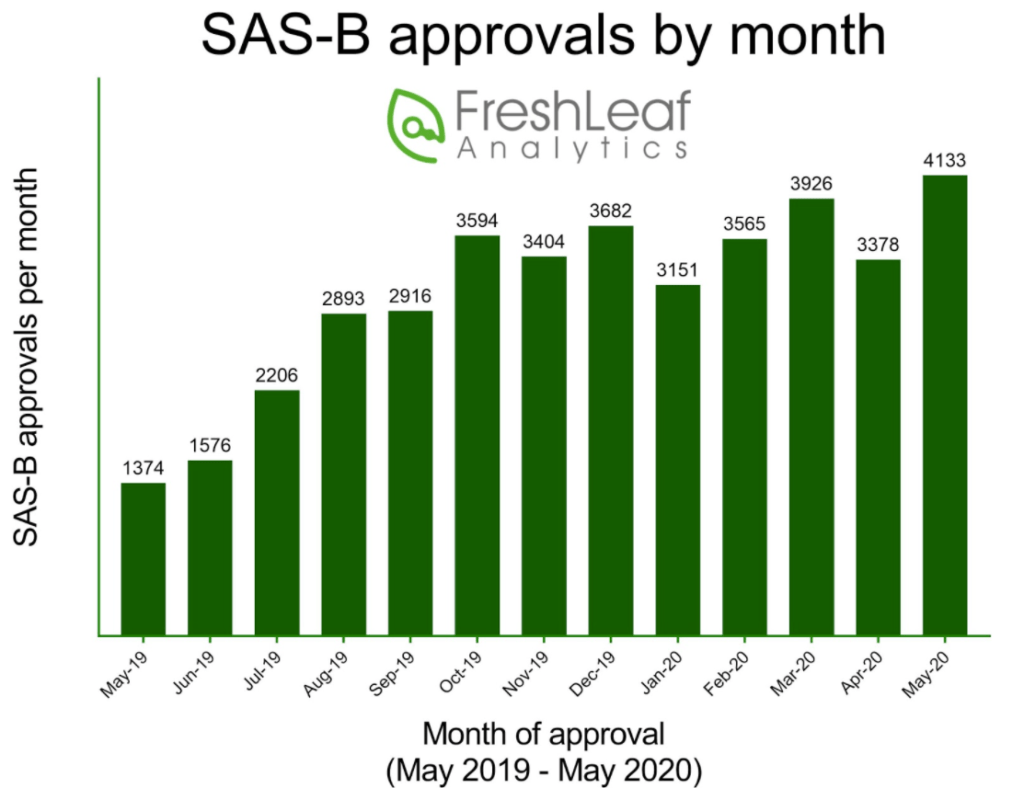 This clearly indicates growing uptake of legal products but doesn’t discount the fact that there are likely still a significant number of Australians accessing cannabis for medicinal purposes through illicit channels.

The CAMS-18 survey was led by Prof. Nick Lintzeris of South Eastern Sydney Local Health District in collaboration with the Lambert Initiative for Cannabinoid Therapeutics at the University of Sydney.